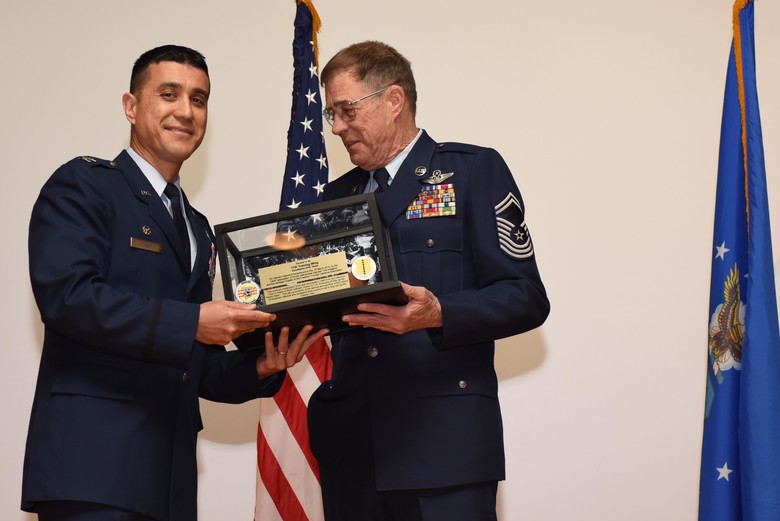 U.S. Air Force Col. Ricky Mills, 17th Training Wing commander, receives a brick from the Hanoi Hilton, presented by retired Chief Master Sgt. Larry Mills at the Base Theater on Goodfellow Air Force Base, Texas, March 29, 2019. The brick was given to the 17th Training Wing by The Heritage Chapter of the Freedom Through Vigilance Association. A symbol of those who answered the call to the Vietnam War, the brick is to never forget those who came before us. (U.S. Air Force photo by Senior Airman Seraiah Hines/Released)

An aerial view of the Prisoner of War camp located at Hanoi, Vietnam in 1970. During the Vietnam War, the POWs sarcastically renamed this camp the Hanoi Hilton. (Courtesy photo)

Retired U.S. Chief Master Sgt. Larry Mills, former cryptologic linguist shares a little about his experieces during the Vietnam War during a special ceremony at the Base Theater on Goodfellow Air Force Base, Texas, March 29, 2019. During his time in the service, Mills flew hundreds of combat missions over Vietnam and Laos and amassed a total of 6,813 combat hours. (U.S. Air Force photo by Senior Airman Seraiah Hines/Released)
GOODFELLOW AIR FORCE BASE, Texas --

During a special ceremony at the Goodfellow Base Theater, a brick from the Hanoi Hilton bricks was presented to the 17th Training Wing, March 29.

During the Vietnam War, over 800 U.S. military were captured and held at 13 prisoner of war camps. After the U.S. attempted to rescue military members held in the San Tay prison, most were moved to be held in and around Hanoi. The POWs at this facility sarcastically re-branded the prison as the Hanoi Hilton.

During the ceremony, The Heritage Chapter of the Freedom Through Vigilance Association and representatives from the U.S. Air Force Doggers, a group of former Vietnamese linguists gifted a brick from the Hanoi Hilton prison to the 17th Training Wing.

“We have a great honor, because for us when we come home every time America thanks us, because they got it right, but it hasn’t always been like that,” said Chief Master Sgt. Lavor Kirkpatrick, 17th Training Wing command chief. “The ones who went before us but didn’t receive the thanks that we are able to, we need to not forget them and to continue to honor them.”

Mills shared the memory of when his role model changed.

“I was like any other kid, I had heroes who were in sports,” said Mills. “But, when I graduated technical training here at Goodfellow, I realized all that my dad had done, and he became my hero.”